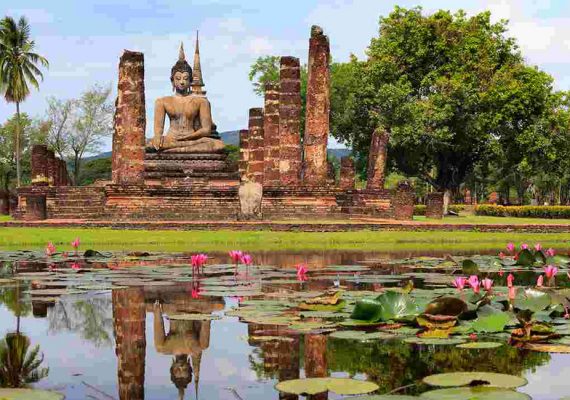 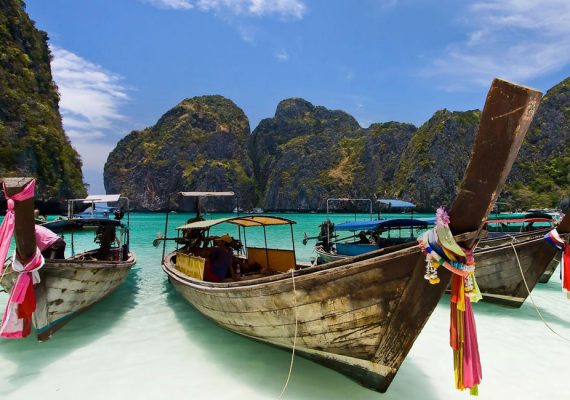 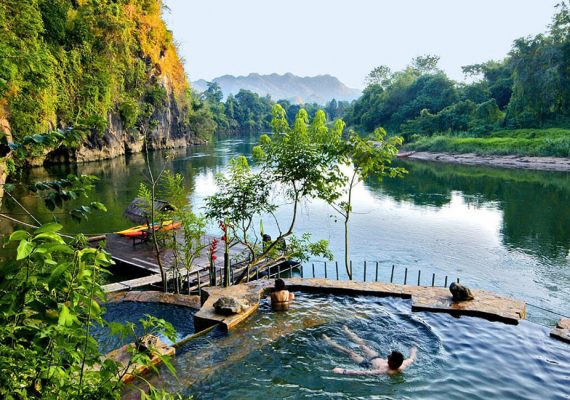 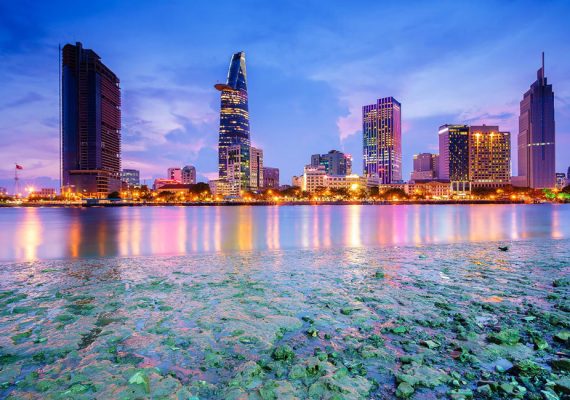 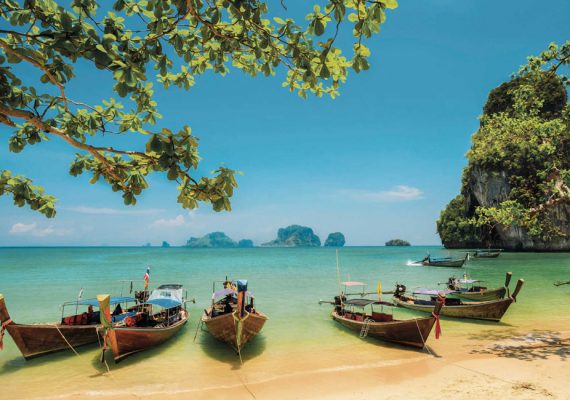 The Grand Palace, Bangkok-The imposing Grand Palace, situated on the banks of the Chao Phraya River, is Thailand’s most sacred site. It used to be the official residence of the Kings of Siam (and later Thailand) since 1782 until 1925 and is made up of numerous buildings, halls, pavilions set around open lawns, gardens and courtyards. It is still used for official events such as royal ceremonies and state functions. It is divided into two main parts which are the Temple of the Emerald Buddha and the royal residence. The latter is divided into three major parts, the Outer Court, the Middle Court, and the Inner Court. The Grand Palace is currently partially open to the public as a museum, but it remains a working palace, with several royal offices still situated inside. The Emerald Buddha, the sacred Buddha image meticulously carved from a single block of emerald can be viewed here on Thailand vacations.

Wat Arun, Bangkok- The architecturally beautiful Wat Arun, also known as The Temple of Dawn and situated again on the banks of the Chao Phraya River, is one of the most stunning temples in Bangkok, not only because of its riverside location but also because the design is very different from the other temples in Bangkok. It is partly made up of colourfully decorated spires which sparkle in the sunshine and stands majestically over the water. Despite its name, it is stunning at sunset, particularly when lit up at night. The spire is one of Bangkok’s world-famous landmarks, over 70 metres/230 feet high, beautifully decorated with tiny pieces of coloured glass and Chinese porcelain. You can climb the central spire but the steps are very steep. It is an important place of worship for Buddhists so make sure to dress appropriately. You can pick up one of the cover-ups that are for rent near the entrance.

Damnoen Saduak Floating Market, near Bangkok- The Damnoen Saduak market is about one hour’s drive from Bangkok situated in a small town. Most visitors on trips to Thailand join a long-tailed boat that takes them to the market which is active among narrow canals with wooden houses on stilts on the banks. When you arrive at the market, you will see fruit and vegetable sellers rowing up the canals delivering their goods to the locals. The market is open every day from around 6.30 am to 11.00 am. The Floating Market is always crowded with vendors floating in their small boats selling agricultural products and local food which are mostly brought from their own nearby orchards.

Safari World, Bangkok- Thailand’s most popular animal and leisure park, Safari World in Bangkok is not your regular zoo. Comprising of two themes; Safari Park and Marine Park, the park offers its visitors a great deal of entertainment and recreation. It offers a variety of shows and attractions to entertain the visitors of the park. Both children and adults seem to enjoy the show with much likeness. Here are a number of shows you can enjoy watching at Safari World in Bangkok- Jungle Cruise, Dolphin Show, Spy War & Hollywood Cowboy Stunt Show, Orangutan Boxing Show, Sea Lion Show, Bird Show.

Ayutthaya, Bangkok- is an ancient capital 85 kilometres/53 miles north of Bangkok. Founded around 1350, Ayutthaya became the second capital of Siam after Sukhothai. By 1700, Ayutthaya had become the largest city in the world with a total of 1 million inhabitants. When it was invaded by the Burmese in 1767, it was almost completely burnt to the ground. Today, what remains are some temples and palaces which were made of stone. This UNESCO World Heritage site, which is actually an island, has 67 amazing temples and ruins with a number of imposing Buddha statues. An example is the Wat Phra Sri Sanphet, which means “Temple of the Holy, Splendid and Omniscient and was revered as the grandest and most beautiful temple comprised of three ancient chedis, or chapels, these ruins. The architecture is breathtaking.

Phi Phi Island, Phuket- Phuket is blessed with magnificent coves and bays, powdery white beaches, hospitable people and lushly forested mountains – everything necessary for a memorable, relaxing stay. Phi Phi Island was where the movie “The Beach” was filmed. It is considered one of the most naturally beautiful islands in Thailand with its coral, long white sandy beaches and backdrop of limestone mountains with sheer cliffs. It is easily accessible from Phuket as it is only 50 kilometres/31 miles in the Andaman Sea reached by ferry. There is no public transportation in Phi Phi which is made up of several islands but only two which are really important, Phi Phi Don and Phi Phi Leh. Some of the activities available there are scuba diving, snorkeling, swimming and pleasant walks along the coastal path with its coconut trees overlooking a turquoise sea.

Phuket Fantasea Show is inspired by Thailand’s rich and exotic heritage, and not only showcases the charm and beauty of Thailand, but also enriches ancient Thai traditions with the wonder of cutting-edge technology and special effects. This includes acrobatics, illusions, pyrotechnics, stunts, aerial performances and more. It involves a cast and crew of over 400 people, 44 elephants, three tigers, 40 goats, 40 chickens and 400 pigeons. The result is a stunning 140-acre theme complex, packed with a multitude of activities and entertainment: a Carnival village with games, handicrafts and shopping; a 4,000-seat theme restaurant offering a grand buffet of Thai and international cuisines; and a breathtaking Las Vegas-style theatrical show, where state-of-the-art technology and special effects enhance the grace and beauty of Thailand’s myths, mysteries and magic in a wondrous extravaganza certain to delight the whole family.

Arrive and check in to the Hotel in Bangkok.

After breakfast your day begins with a visit to the renowned Grand Palace, the former residence of Thai kings. In this complex, you will be able to relive the splendor and pageantry of the past. A highlight will be the impressive Emerald Buddha. Continue to Wat Po, one of the oldest and largest temples in Bangkok where the large Reclining Buddha is housed. In the evening, you will take a cruise on the Chao Phraya River which cuts through the city, taking in spectacular sights on both banks including the Temple of Dawn, and the Grand Palace. Thai delicacies will be served during the cruise.

After breakfast head outside the city to Damnoen Saduak to see the colorful floating market where the customers travel in their boats to the merchants who are lined up on the sides of the canals selling their wares. Also visit the tallest Buddha pagoda in the world, the Phra Pathom Chedi. After lunch at the nearby Rose Garden, you will be entertained by a Thai cultural show including music, singing and the martial arts. Return later back to Bangkok.

After breakfast proceed to Safari World or Ayutthaya full day tour and back to Hotel for Overnight stay.

After Breakfast fly to the south of Thailand to the beach resort of Phuket, your home for the next three nights. Arrive and check in to the Hotel for Overnight stay.

After Breakfast you will proceed for a boat ride to Phi Phi Island where the movie “The Beach” was filmed. You are free to explore the charms and serene beauty of the island. Later, you will have the opportunity to travel on a small boat to a secluded beach to swim, snorkel or just relax. After lunch here, enjoy free time before it’s time to travel back to Phuket to the Hotel for Overnight stay.

After Breakfast totally at leisure to explore, swim, relax or go shopping as you wish. In the evening proceed for Phuket Fantasea Show, have Dinner and enjoy the Show. And back to the Hotel for Overnight stay.

After Breakfast proceed to Airport for departure.